Skip to Main Content
It looks like you're using Internet Explorer 11 or older. This website works best with modern browsers such as the latest versions of Chrome, Firefox, Safari, and Edge. If you continue with this browser, you may see unexpected results.
California Western School of Law 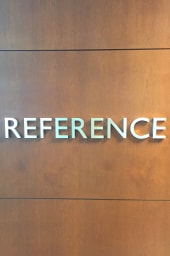 This work by the California Western School of Law Library is licensed under a Creative Commons Attribution-NonCommercial-ShareAlike 4.0 International License.

Check Rule 10 on page 94 of the 20th edition along with other sections that it cross references to find out how to cite judicial opinions.

Judicial Branch at the Federal, State, and Local Levels of Government

Systems of Citation: The Bluebook & The California Style Manual

Federal court rules refer you to The Bluebook for how to cite a resource. California court rules refer you to the Bluebook or to the California Style Manual—you get to decide. You are expected to cite any authority in the way that the court to which you will cite that authority demands, which means that you are expected to be able to use these citation manuals.

This guide uses the Bluebook.

If you are citing to specific material within a judicial opinion, then use a pinpoint citation to show which page number it is on. This is sometimes called a “pincite.” Pinpoint citations are discussed in Rule B10.1.2 on page 12 and Rule 3.2 on page 72. When you refer not to the whole case, but instead to a quotation or to ideas at a particular point in the case, then you would put the page number where the case begins in the report, then a comma, and then the page number where the quotation or ideas that you are referring to can be found. An example of a pinpoint citation is listed with each reporter in this guide.

Some reporters are designated as official. This means that a statute or court rule makes that reporter the official source of a court's judicial opinions. All other reporters are unofficial reporters.

Multiple Series in one Reporter

Reporters are print sources, and part of that print system include various series. A series means that the reporter can have multiple volumes with the same volume number; there is volume one of the first series, volume 1 of the second series, volume one of the third series, and so on. This is done whenever the publisher creates a new series and so restarts the volume numbering. The new series typically continues where the former series ended, and sometimes there is a change in format or editorial enhancements that seems to indicate a reason for the publisher to have created a new series. The Federal Reporter has three series (F., F.2d. and F3d.) that all start at volume one. Take care to note of the case citation to ensure you are looking for your case in the correct series.

This guide was created as a Case Citations guide by Erin Grimes and Robert O'Leary. Ms. Grimes wrote the section on federal judicial opinions.